A region of space known for intense plasma storms and gravitational anomalies. The plasma storms make starship navigation in the area extremely difficult, and most captains avoid the area.

In the 2370s, the Maquis used the Badlands as a staging area and hiding place during their campaign against the Cardassian Union. Now the True Way is reviving those tactics in their fight against the Federation.

Commander Mesi Achebe explains the main goal in the Badlands Battlezone during a cutscene after player's first visit.

Welcome to the Badlands.
Terran forces are invading our universe through weak points in space. Shut down the Terran devices to drive back their forces. Send the Terrans back to their Spiegeluniversum! 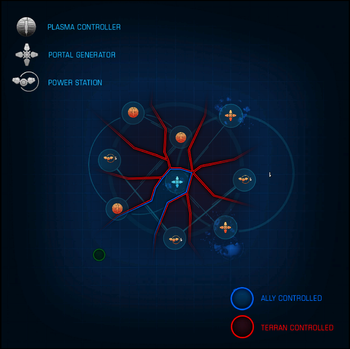 Available to players once they reach Level 60, the Badlands Battlezone is divided into nine areas; in each area, players must work to close a portal to the Spiegeluniversum. Efforts in the Battlezone are coordinated by the U.S.S. Malinche.

There are three types of points which can be captured to advance the Battlezone Ally Control meter:

Once all nine points have been captured, three Mirror Fortresses appear on the map: Empok Nor, Terran Empire Base and Klingon Alliance Base.

If the players are able to defeat all three starbases within 10 minutes, a Terran Empire fleet, led by the I.S.S. Enterprise, invades the Badlands. Players have 5 minutes to defeat as many Terran Empire ships as possible.

For each captured point, the highest reward players can receive is: a choice between 10

Based on how many Mirror bases are defeated, completing the Battlezone will reward the following:

A bonus will be added to the final objective reward based upon the number of points player captured. The point capture credit is stored until the player completes the Battlezone, and then it is reset.

Following accolades can be obtained in the Badlands Battlezone: